Named for the incredibly sweet bubble gum brand, Bubblicious is a fruity strain with strong indica vibes. It is a distinct phenotype of Bubblegum, a multiple Cannabis Cup award winner whose mysterious genetics were established in Indiana and then tweaked over several botanical generations in the The Netherlands. Bubblicious was created by Nirvana Seeds, the prolific breeding group responsible for potent strains like Black Jack and Jock Horror.  Cannabis testing lab Analytical 360 has found Bubblicious flowers to have anywhere from 15% to as much as 25% THC.

Bubblicious boasts large flowers that taper off into a clear conical shape. The cured flowers adhere in a somewhat fluffy bud structure, with wispy leaves clinging to the central stems. The leaves themselves are spring green with yellow pistils. In some phenotypes, shades of purple and even pink stand out in the flowers; these vibrant colors come about when high genetic concentrations of anthocyanin pigments are agitated by cold weather in the growing process. When cured properly, buds of Bubblicious has an intensely sweet and strawberry-like scent that indeed smells like saccharine bubble gum; it may also remind some users of cotton candy. When broken up, buds also emit some dank, earthy odors. Bubblicious has a smooth smoke that leaves a fruity, skunky taste lingering on the smoker’s palate. This unique strain is particularly pungent —  those looking to keep their consumption discreet may want to plan ahead.

Bubblicious moves quickly for an indica, conferring a heaviness in the head and limbs. A wave of relaxation may make users move or speak more slowly. Despite this slowdown in physical functioning, however, smokers do not lose mental clarity — Bubblicious stimulates rapid associations in thinking and can be a great tool for creative work or for solving entrenched problems that may require a new perspective. Bubblicious’ action on both mind and body make it appropriate for many different activities, including exercise, errands, and socializing. Its can be enjoyed at any time of day and is said to be potent even for cannabis veterans.

This strain has value for medical cannabis patients as well. The newfound thoughtfulness that comes with Bubblicious can help those with moderate anxiety or depression to appreciate their surroundings and to live more “in the moment.” A sustained sense of focus can also be useful for those with attention deficit disorders. Its sedative effects can be a salve for deep-seated pain, whether superficial or chronic and nerve-related while anti-emetic and anti-convulsive properties make this a treatment for nausea. Because it can stimulate recursive thinking at the same time that it promotes relaxation, Bubblicious is not necessarily recommended for use before bedtime to relieve insomnia.

Breeders Nirvana Seeds have made packaged seeds of Bubblicious available for retail. At-home growers can also obtain cuttings from mature plants to serve as “clones.” A hearty plant, Bubblicious is a good choice for novice growers and can be successfully cultivated indoors or out (although outdoor growing requires warm, semi-humid climates). The plants have a characteristically indica shape, short and bushy with strong lateral branching. Growers should “top off” these plants by trimming away any large leaves that could block light and air from reaching low-growing flowering nodes. Growers should also bring out the flowers’ full colorful potential by occasionally exposing plants to colder than averages temperatures late in the vegetative stage. This strain flowers within a brief 6 to 9 weeks when grown indoors. As much as Bubblicious is a pungent smoke, it is also a pungent grow, and anyone looking to keep their operations secret should invest in odor control measures like carbon air filters or exhaust fans. Curing the buds — by first hanging them up to dry and then sealing them in airtight containers with moderate humidity — will help preserve their singular flavor and resin production.

Bubblicious is popular in Amsterdam where it was initially perfected. It only stands to gain a higher profile in the U.S. market, where evenly-balanced and flavorful hybrids are in constant demand. Nirvana may want to do some damage control in Oregon, though — in September 2016, the Oregon Liquor Control Commission banned the sale of Bubblicious and several other strains whose names are potentially appealing to children.

Be the first to review “Bubblicious” Cancel reply 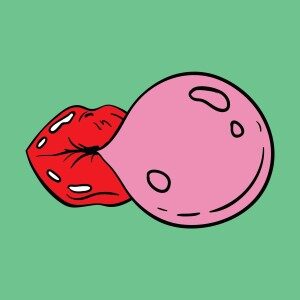