Blue Jay Way is a balanced, CBD-rich hybrid with effects that lean more indica than sativa. It is the creation of Las Vegas-based producers Matrix NV, who have stabilized flavor-focused strains like Dream Queen and Tangilope. Blue Jay Way is a cross between DJ Short’s True Blueberry and old warhorse OG Kush. Specifically for a high ratio of the therapeutic cannabinoid CBD (rather than the more common and psychoactive THC), Blue Jay Way is an appealing option for those who’d like to medicate various ailments without becoming unmanageably high. This strain’s THC content has been measured at between a meager 4% to 6% while its CBD content clocks in at between 8% and 16%.

Blue Jay Way is marked by impressively large, cone-shaped flowers that look almost like hops (a plant that is, in fact, closely related to cannabis). The sticky leaves adhere in a dense, indica-typical bud structure. Leaves themselves catch the eye with vibrant shades of green and yellow and are threaded through with pale brown pistils. As with ancestral strain Blueberry, some phenotypes of Blue Jay Way also show off shades of purple in their leaves, courtesy of pigments called anthocyanins that produce these deep hues when agitated by cold weather during the growing process. These colorful flowers are also dotted with cloudy white trichomes that make them very sticky to the touch and difficult to break up without a grinder.

When properly cured, Blue Jay Way shows off its deeply aromatic genetics. A sharp orange scent jumps off of the flowers, tinged with some tart berry notes. There’s also a suggestion of some old-school funk and skunkiness thanks to parent strain OG Kush. Grinding up or breaking open the buds yields some acrid, beer-like notes, further underscoring this strain’s similarity to hops. Blue Jay Way burns with a smooth, even smoke when combusted and tastes like blueberries on the exhale. A vegetal and slightly piney taste lingers on the palate for a while afterwards.

Blue Jay Way acts quickly, giving smokers a faint tingle around the eyes and temples soon after they’ve toked. This physical sensation spreads down the neck and through the core, creating relaxation without necessarily feeling disorienting. While users may detect some mild changes in visual and auditory perception, full-on psychedelic distortions are not commonly reported due to the strain’s lower THC content. Instead, Blue Jay Way’s effects are characterized by soothing feelings of physical calm and mental focus that can be put to use according to the user’s preference. It can be provide a great backdrop for working through tasks as mundane as cleaning the house or as complex as analytical problem solving. In any instance, Blue Jay Way is unlikely to incapacitate those who enjoy it, instead leaving them lucid and functional — unless, of course, dosage is increased over a short period of time, in which case the strain’s relaxation can tip over into sedation. This hybrid’s effects are said to be long-lasting for even experienced cannabis users.

Because of its high CBD content, Blue Jay Way may be more useful to medical than to recreational cannabis users. Its mellow (and in some cases euphoric) vibes may alleviate the  symptoms of mild to moderate stress and anxiety. Its sustained sense of focus can also help those with attention deficit disorders to concentrate on any duties at hand. Physiologically, this strain may be particularly good at soothing deep-seated aches and pains, while, in high enough doses, it can work against stubborn cases of insomnia. Because of its relative lack of cerebral or psychoactive properties, Blue Jay Way may be a good choice for those who are prone to panic or who have a low tolerance for THC.

Matrix NV has not made seeds of Blue Jay Way available for commercial sale. As such, prospective growers must obtain clippings of a mature from a reputable breeder in order to grow clones. While there is little information available on best practices for cultivating this specific strain, like many hybrids, it can be grown indoor or outdoors if growers live in a warm, Mediterranean-like climate. Those looking to bring out the strain’s impressive purple hues should expose their crops to cold (but not freezing) nighttime temperatures just before flowering begins.

Blue Jay Way’s mellow and refreshing effects are a boon to cannabis fans who’d like to self-medicate without feeling disconnected or out of control. The strain’s fruity, aromatic flavors are the icing on this CBD-filled cake.

Be the first to review “Blue Jay Way” Cancel reply 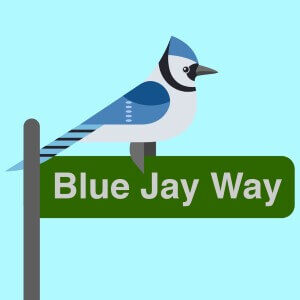